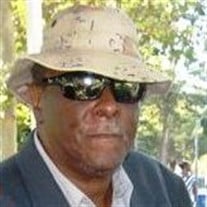 Andrew Hayden Obituary Son of the late Bertha Lee Jones and Addison Floyd Hayden, Andrew Jerome Hayden was born on March 1, 1942 in Texarkana, Texas. Affectionately known as “Dude” he attended Dunbar High School in Fort Worth, TX but graduated from Jordon High School in Watts after his family moved to California. Andrew was a hard-working man who held jobs working with the Los Angeles County Probation Department, Locke Aircraft and the United States Post Office, where he was working in the mid-1980’s when he lost his sight. Glaucoma may have taken Dude’s vision, but there was nothing that could take away his independence, his fighting spirit or his love for our Lord Jesus Christ. Despite not being able to see, Dude rarely complained. So long as he had his radio, his home-made mix tapes, his Old English, his TV westerns, his Oakland Raiders, his lotto tickets, his watch, his cell phone and something to eat, he was good-to-go. Andrew Hayden was called home on February 19, 2017. He was preceded in passing by his parents and his older brother Willie Hawkins. He was survived by his children: Andrew Jr., LaTonya, and Dion; his former wife and mother of his children: Bonnie; his beloved baby sister Louise Butler and her children: Tonya, Tonette, Tasha and Charlene; his grandchildren: Andrew III, Betty, Andrea, Stephanie, Carlesha, and Carlus Jr.; Louise’s grandchildren: Anthony, Sharleen, Taylor and Brooklyn; his great-grandchildren: Alicia, Andre, Ajae, Andrew IV, Kymoni, Toni, Keylun and Darreona; and a host of nieces, nephews, family members and friends who loved and adored him. He will be sorely missed

The family of Mr Andrew Jerome Hayden created this Life Tributes page to make it easy to share your memories.

Son of the late Bertha Lee Jones and...

Send flowers to the Hayden family.