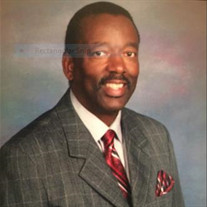 On May 24, 1956, heaven shined its light on Deacon William Franklin and Mrs. Ulysses Virginia Williams when they welcomed their son, Auty Nugel Williams into the world. He was the younger of two children and he and his brother, Andre Salon Williams were not only bothers, but friends. Auty’s parents were active members of McCoy Memorial Baptist Church under the leadership of Rev. E. A. Anderson and Rev. R. A. Williams. His father was a committed deacon, and his mother was a dedicated Sunday School teacher.This is the church where Auty gave his life to Christ and became a faithful and active member. Auty attended Normandie Elementary School of Los Angeles, CA, Foshay Middle School of Los Angeles, CA, and graduated from Manual Arts High School of Los Angeles, CA. As a school aged child, he took an interest in basketball, which became a passion of his. He was very talented and was sought after to play for various teams. In May of 1979 Auty graduated with a Bachelors of Science degree in Physical Education and a minor in Religious Studies from California Baptist College of Riverside, CA. After college, he played professional basketball in Portugal. During his college years, not only did he excel in basketball, but he also accepted God’s calling on his life to serve and teach the Word. Rev. Auty Nugel Williams was always Faithful to his Father, Faithful to his Family and Faithful to his Friends. Auty demonstrated his faithfulness to his Father through his love and passion for the ministry by receiving his license to preach the gospel on April 12, 1981 under the leadership of Dr. R.A. Williams. He took every opportunity to strengthen his teaching and preaching skills and build his close relationship with the Lord through constant study of the Bible, teaching Sunday School, witnessing to the unchurched and unsaved, and providing communion to the sick and shut in, just to name a few. After accepting God’s call, he became an ordained minister on November 27, 1988 under the authority of McCoy Memorial Baptist Church. As Auty continued to grow in the Lord, he realized another calling on his life; that calling was to lead his own church. He organized and pastored New Birth Baptist Church in Los Angeles, CA and has been shepherding the flock of God’s people for 23 years in the Los Angeles areas. For the past 11 years, Auty served as pastor of Rock of Ages Missionary Baptist Church of Los Angeles, CA. He not only demonstrated his commitment to his Heavenly Father, but also throughout his career working in the public sector. His meek spirit gave him opportunities to share the gospel as a Driver’s Educational Instructor at Torrance Unified School District, as an Operations Manager for Sears Driving Traffic School in the California Region, as a Coach and Teacher’s Assistant at 32nd Street School and USC Magnet School in the Los Angeles Unified School District, and while serving as a volunteer Golf Coach at Maggie Golf Course. He was never ashamed to share the gospel of Christ in whatever area he was in. While pursuing his passion in the ministry, the Lord saw fit to send Auty his soul mate. In 1984, the love of his life walked down the aisle and joined McCoy Memorial Baptist Church. He immediately noticed her and in 1986, he and Sheila Beasley were married. Auty and Sheila were married for 30 wonderful years and to this union, two children were born. They became the proud parents of three beautiful children. Auty was faithful to his family. He never failed to be there for his wife, children, grandchildren and the many others who had the distinct honor of being a part of his family. His mild and understanding nature made it so easy to talk to him and he was always willing to give advice, and most importantly, give you what you needed from scripture. His wife and children adored his smile that lit up their lives, his laugh that struck a chord in their soul, and his voice that demanded your attention as he spoke. Yes, he was tall in stature, but his physical height was no comparison to the size of his heart. Auty was also faithful to his friends. No matter what you needed, he would do his best to be a blessing to you. He used his life to be a tangible and physical display of how God expects us to treat and love one another. He always had a kind word and a prayer for you. He was dependable, passionate, loyal, servant-oriented and filled with joy. Auty was more than a physical presence. He was humble, kind, loving and God-fearing which made him a spiritual juggernaut. He was a wonderful husband, father and friend. He enjoyed talking about sports, particularly basketball! He took pleasure in golfing, gardening,and playing late night card games of 3-13. He had a funny sense of humor and enjoyed telling jokes. Auty was also very talented as he engaged in writing poetry, was a self-taught musician who played the piano, organ, and drums, and also composed music. Auty Nugel Williams joined his parents and brother to be with the Lord on December 10, 2016 at 2:20 p.m. He leaves to cherish his lovely memory, his wife of 30 wonderful years, Sheila Williams; one son Auty N. F. Williams, two daughters, Qualishia M. Welch, Aukura V. Williams; two grandchildren Taryn N. Coleman, V. Amir Nash; one great grand-child Eric Ray, Jr.; two brother-in-laws Calvin Beasley,Clarence Beasley, Jr.; one special sister-in-law Mary Lou Demby; a loving Aunt Euradel Williams; and a host nieces, cousins and friends. We have been truly blessed to have had such an upright, gracious, and holy man amongst us and will miss him greatly. We loved him most, but God loved him best.

On May 24, 1956, heaven shined its light on Deacon William Franklin and Mrs. Ulysses Virginia Williams when they welcomed their son, Auty Nugel Williams into the world. He was the younger of two children and he and his brother, Andre Salon Williams... View Obituary & Service Information

The family of Pastor Auty Nugel Williams created this Life Tributes page to make it easy to share your memories.

Send flowers to the Williams family.