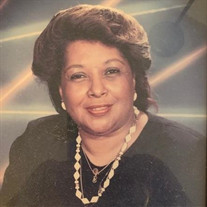 Obituary 1937-2019 Delores Joyce Edner was born March 24, 1937 in Bastrop, Texas as the 2nd daughter of Sandy and Ethel McIntosh. As a young girl Delores and her sister spent time in the church and sang in the children’s choir. Delores spent summers taking train rides to stay with family and despite her wishful thinking did not escape dedicated piano lessons. Delores relocated to Los Angeles, California during her junior high school years and went on to graduate from Fremont High School. She attended Metropolitan Business College in Los Angeles, California, where she excelled in shorthand, typing, bookkeeping and accounting. She went on to attend Compton College where she studied Foreign Language. As an adult she became lovingly known as Joyce or D. Joyce. She met and married Authur J. Anderson in 1955. From their union, Andre Lamont, Armond Kurt and Darian Joyce Anderson were born. In 1968 she was married to Rev. Dr. Voris James Edner. With him she continued her work for the Lord serving in the church. She remained by his side until his homegoing in 1993. In 1997, she received her BA- Born Again degree in the Apostolic Church, her work for the Lord began to flourish. She was a strong prayer warrior, a missionary, an Evangelistic speaker, a worship leader and program coordinator. D. Joyce took pride in helping others and supporting her community however she could. Her work for the Lord included her participation on District and Annual Conference Levels, Missionary Society Committee, member of the Connectional level and the Ministers Spouses Widows Committee. She gave her all to all that she was called to do. D. Joyce retired from Lynwood Unified School District in Secretarial Administration with over 25 years of service. A former Commissioner of Community Affairs, a member of the Mayor’s Senior Citizens center advisory Committee as well as a former Notary Public. Her love for children was witnessed by her devotion as a foster mother from 2001 to 2004. She was dedicated to caring for infants and took joy in molding their young lives. Without God in her life none of her accomplishments would have been possible. She strongly believed that the fear of the Lord sustains all. She lived by the principal that the walk is long and unsure but truly not in vain. She will be joining her brother Sandy McIntosh Jr. and her oldest son Andre Lamont Anderson who preceded her in death. She will always be remembered and loved by her sister Ellen Doris Huey and brother in law Gum Ngung (Johnny) Huey of Cerritos, California; her children Armond Kurt Anderson and Darian Joyce Anderson of Los Angeles, California; her grandchildren: De Andre DeShawn , Anthony La Ron, Armond Jr., Donnell, Da’Jon Gregory, Kurt and Daniel along with a host of nieces, nephews, cousins and friends.

Obituary 1937-2019 Delores Joyce Edner was born March 24, 1937 in Bastrop, Texas as the 2nd daughter of Sandy and Ethel McIntosh. As a young... View Obituary & Service Information

The family of Mrs Delores Joyce Edner created this Life Tributes page to make it easy to share your memories.

Send flowers to the Edner family.