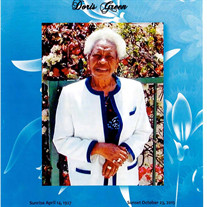 Doris was born on April 141 19271 in Camden, Arkansas, to Ben and Birdie Lee Utsey. She was one of five children. She was raised in the church and accepted Christ at an early age. She received her education through the Camden School District . Doris lived and worked in Camden for most of her young adult life. She met and fell in love with A.D. Green.They were united in marriage on June 2, 1951. Shortly after that they, moved their small but growing family to Los Angeles, California.Their union was blessed with six children. After moving to Los Angeles, Doris joined Price Chapel African Methodist Episcopal Church where she was an active member of the Lay Organization and the Priscilla Matlock Missionary Society; she also served as director of the Young Peoples Division (YPD),and Doris was a member of The Voices of Price Choir. .. Once in Los Angeles, Doris worked for numerous Hollywood actors and professional dancers until she retired in 1993. She was also a Princess House Consultant. Being the outspoken person she was, she had no problem telling anyone how she felt. She always kept it real and it was always done with love. She spoke with wisdom as she shared her knowledge with you, and continually left you something to think about. She had a caring and giving soul. She would give you her last dime and the shirt off of her back. She leaves to cherish her memory, 6 children, Joyce Cline, Reverend Benjamin Hollins (Annette),William Green, Evelyn Green, Reverend Michael Green (Kathy), and Mary Green. 25 grandchildren, 29 great grandchildren, 1 great great grandchild, and a host of niece , nephew and friends. Doris loved all of her grandchildren but there are 3 granddaughters and 3 great granddaughters that went the extra mile for grandma; Shimika Robinson, Carolyn Green, Tiffinie Richie,Njeri Brown, Stacy Hickman and Addison Richie. Waiting to greet Doris in heaven are her parents Birdie and Ben Utsey, her husband A.D. Green, children Carolyn Green and Darryl Green, grandson William Green Jr., sisters Tommiesean Collins, Mary Alice Harris, Irma Jean Polk; brothers Richard Utsey, Bennie Utsey, Emment Utsey, Clifford Garner, her road dog and best friend Katie Morris.

Doris was born on April 141 19271 in Camden, Arkansas, to Ben and Birdie Lee Utsey. She was one of five children. She was raised in the church and accepted Christ at an early age. She received her education through the Camden School District... View Obituary & Service Information

The family of Doris Green created this Life Tributes page to make it easy to share your memories.

Send flowers to the Green family.