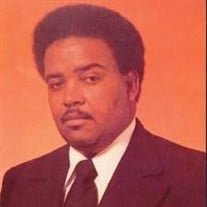 John Allen Mullen, Jr. was born on July 17, 1933 to John Allen Mullen, Sr. and Addie Mullen in Bastrop, Louisiana. After the death of his mother, John was reared by his grandmother, Amita Springs Lewis and his father. As a child John was raised in Bastrop, Louisiana and Natchez, Mississippi and he accepted Christ at an early age. John joined the U.S. Military and received three service medals while serving in the Korean War. After being honorably discharged in 1955, he relocated to Los Angeles to work with his uncle, Willie Springs, where John assisted him in managing his businesses. John was a faithful member ofEl Bethel Missionary Baptist Church for over 50 years. He served as President of the Usher Board on many occasions. As an usher, he served with a faithful attitude and a loving heart. John truly loved the Pastor and members of El Bethel Missionary Baptist Church, worshipping with them until his health declined in 2016. In 1974, John married Marjorie (Margie) Finks, the love of his life. Shortly after the start of their marriage, John and Margie lovingly opened their home to care for 29 foster children. They loved, nurtured, sacrificed and cared for them as their own. After the home-going of his lovely wife, Margie, John continued to care for foster children, serving as a foster parent for over 40 years. On the e ening of Saturday, August 5, 2017, God called John home to be with Him in glory. John leaves behind his siblings: Bobbie Griggs (Jesse), Lois Higginbotham (Albert), Roy Mullen (Mary), and Thomas Mullen. His son, Robert Mullen; his daughters: Angela Williams (Earl), Claudia Butts, and Gabrielle Riley-Williams (Donnie). His niece (daughter after his own heart) Addie (Virgie) Simon (Howard), and their children: Nicole, Natalie, Nichelle, and Howard Jr. Other nieces: Etta Jean Foley (Lawrence), Chantae Taylor, and Labell Wilson. His grandchildren: Andre, Phillip, Carrie, Erienne, Jarred , Cameron, Alexandria, Evan, DeLano, Ariella, Kashaon, and Karmon. Children that he raised as his own until his home-going include Roneshia Williams, Antoine Williams and Katherine Carter. He also leaves behind a host of nieces, nephews, foster children, and friends.

John Allen Mullen, Jr. was born on July 17, 1933 to John Allen Mullen, Sr. and Addie Mullen in Bastrop, Louisiana. After the death of his mother, John was reared by his grandmother, Amita Springs Lewis and his father. As a child John was raised... View Obituary & Service Information

The family of Mr John Allen Mullen Jr created this Life Tributes page to make it easy to share your memories.

Send flowers to the Mullen family.