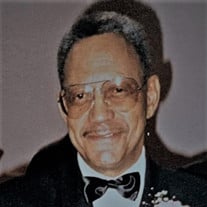 Kenneth E. Russell, Sr. A comforter. A gentleman. Love ambassador. Proud and faithful Child of the King. A father, grandfather, and a loyal friend. Kenneth, affectionately known as " Kenny," was born in Champaign-Urbana, Illinois, on June 24, 1933 to Elizabeth and Horace. Following high school, Kenny served a tour of duty in the United States Army during the Korean War. Upon his honorable discharge in 1953, he followed his mother and moved to Chicago. He created a new life in Chi-town and discovered a pace closer to his true, passionate self-vast,bright, ambitious, and full of opportunity. On a vacation in sunny Southern California, Kenny vibed with the rhythm of the West Coast and his visit became a permanent move. In The City of Angels, Kenny planted deep roots. He started his family, fathering his pride and joy, Kenneth E. Russell, Jr. and his heart's delight, Patrice Elizabeth Russell. Kenny was an avid traveler, sports fan, and jazz enthusiast. He held a long career with Continental Airlines and Garrett Aviation as an airplane mechanic and fueler, which enabled him to travel frequently. Kenny played baseball for his company team, winning many trophies. He showed his family new cultures and landscapes throughout the country. He enjoyed the arts, especially jazz by his favorite legends John Coltrane, Frank Sinatra, and Ella Fitzgerald. Once in a while, you would catch Michael Jackson or Earth, Wind & Fire in his car's S-track rotation. Kenny's love, passion, and commitment for family ran deep. He had an unyielding love for his mother Elizabeth and followed her footsteps to Bryant Temple AME. Once he set foot in his soon-to-be Los Angeles church home, he immersed himself in service as a member of the VLB Doorkeepers Usher Board and the Men's Chorus. With his all-in nature, Kenny gave his time, financial support, and love; he made lifelong friends during his time at "The Temple." Kenny was acknowledged for his dedication and outstanding service as a Trustee and received Father of the Year and usher leadership awards. Kenny was always a giver and a man imbued with lifelong service. It was his love language one that was palpable and treasured by many. He gave children of the church silver dollars every week and took great pride in caring for the sick and broken members of the church; it was his ministry. The sun set on Kenneth E. Russell Sr.'s earthly life on the morning of Thursday, February 6, 2020. A sweet peace wafted through the atmosphere. Suffering and confusion brought on by an eleven year battle with dementia and Alzheimer's ended peacefully. Through it all, Kenny persevered and remained proud and exceptionally strong. For that, we are grateful. Those who are here to reflect Kenny's precious memories are: his wife Barbara J. Russell; his son Kenneth E. Russell, Jr. (Michelle); his daughters Patrice E. Russell and Aretta Covington; grandchildren Phoebe Russell, Shenick Covington, and Carrel Hawkins; great-grandchild, Nia Ja'liene Lewis; companion in his later years Kasandra Jasper; goddaughter Deanna McNeally; nephew Mark Hunter Gray; and a host of friends, relatives, and his beloved Bryant Temple family. We can all rejoice in the infinite joy he is experiencing in heaven and relish in his legacy of love.

Kenneth E. Russell, Sr. A comforter. A gentleman. Love ambassador. Proud and faithful Child of the King. A father, grandfather, and a loyal friend. Kenneth, affectionately known as " Kenny," was born in Champaign-Urbana, Illinois, on June 24,... View Obituary & Service Information

The family of Mr Kenneth Earl Russell Sr created this Life Tributes page to make it easy to share your memories.

Send flowers to the Russell family.