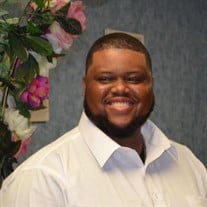 Michael Charles Shelton, Jr. was born on May 29, 1982, in Los Angeles, California, to Ramona Lynne Berry and Michael Charles Shelton. He was the eldest of four siblings. From birth, Michael was affectionately called Mikey by his family and close friends, and “Dirty Red” by his grandpa, William Berry, Jr., who preceded him in death. He was best known by everyone for his athleticism, his sense of humor, his voice of reason and his intelligence. He was identified as intellectually gifted in elementary school. This intelligence contributed to his ability to excel in - as well as coach - sports. He graduated from Gardena High School in 2000, making him a Mohican and a Panther. After high school he briefly matriculated at California State University at Long Beach. He then worked at Broadacres Avenue School as the computer lab instructor, and afterwards, he worked for Wells Fargo Bank, where he met the love of his life, mother of his children and devoted wife, Daisy. Since the age of 5, “Mikey” participated in organized football, basketball, and baseball starting with the City of Carson Parks, Carson Junior All-American Football and Gardena Pop Warner. He also excelled in sports in elementary school, where he ran track and played basketball for his school and won several awards He played in baseball and basketball leagues like Slam-n-Jam prior to high school. In junior high school, he was a key starter on his City Championship basketball team at Peary Junior High School. In high school, he made the Varsity basketball team in the 10th grade. He was an All-League City first team starting fullback, who also played linebacker and punter on the 1999-2000 Championship football team at Gardena High. He received numerous accolades and recognitions for his achievements on the football field and basketball court. After high school, he coached 6th, 7th, and 8th grade basketball at Peary Middle School for a year. All three of his teams did not lose one game that year. He went on to coach football at Gardena High School as well as Lakewood Pop Warner. He stood out as an exceptional coach because he understood the nuances of teaching and coaching, and was patient enough to coach the fundamentals until the players learned the skill. He was a connoisseur of the game of football. His IQ for the game was off the charts. He spent countless hours passing on his football knowledge to his brothers, sons and many other young men. He was Ty, LV, Lil Al, and King’s main coach and trainer throughout their years, which directly led to their success as well as the successes of many others. Mikey was a big sports fan. He was a devoted Dodger and Raider fan, wearing Dodger gear as an infant and Raider jackets as early as elementary school. He was also an avid college football game fan. He watched, taped and studied the game on a weekly basis. Mikey was the definition of “Super-Dad”. If there was a “Dad’s Hall of Fame”, he is worthy of induction. He was a father figure to his siblings and went above and beyond in his active and never-ending support of his children, family and friends. He loved video games, football, family gatherings, and homemade meals — specifically his aunt’s mac and cheese and peach cobbler, and his grandma’s banana pudding. Mikey could be counted on to fire up the backyard barbeque on most Sundays. His excellence in grilling earned him the coveted “Chef Sheltonator” apron. He is known by all for his sense of humor. He made us all laugh with the most hilarious, unexpected things he would say and “names” for people he would make up. He couldn’t take a picture without making a face. He was a beautiful, gentle giant, affectionately called “Honey Bear” by his wife and loved by everyone. Michael professed his faith in Jesus Christ at an early age and was baptized at The Macedonia Baptist Church of Los Angeles. He attended Macedonia since his youth and performed in many of the church Sunday School productions. He was employed as the church security guard since 2014, where he was known as “Big Mike” and praised for his quiet yet helpful attitude. On Sunday morning, January 17, 2021, Michael was called home to be with the Lord. He will be remembered as a loving and caring husband, father, son, brother, nephew, uncle, grandson, cousin and friend. He was preceded in death by his maternal grandfather, William M. Berry, Jr. and his paternal grandparents, Catherine Shelton and Eugene R. Shelton. His memory will be cherished forever by his wife Daisy Shelton and his three sons Lavon Bunkley-Shelton, King Shelton and Major Shelton; his parents Ramona Mance and Michael Shelton (Kim); his sisters Monique Mance Finley (James) and Twynisha Shelton; his brothers Ty Mance and Al Edwards; his grandmother Naomi Berry; his uncles William M. Berry, III (Clarissa), Marvin Shelton and Maurice Wellington (Brandi); his aunts Bridgette Berry-Smith and Michelle Shelton-Hibler; his maternal first cousins William M. Berry IV, Lillian Berry, Rishael Hall Washington (Marquise), Aaron Berry and Jonathan Berry-Smith; his paternal first cousins Tierra Hibler, Ah’Jalae Hibler, Madison Wellington, London Wellington and Maurice Wellington, Jr; his nieces Keri Calmes, Jae Finley, Mhina Finley and Amber Linares; nephews James “Tre” Finley and Jimmy Omar Linares; his Godparents Karen and Eric Russell; Godson Jalen Cole; the Godfather of his sons, Jason Cole; and a host of other relatives, extended family members and friends.

The family of Mr Michael Charles Shelton Jr created this Life Tributes page to make it easy to share your memories.

Send flowers to the Shelton family.