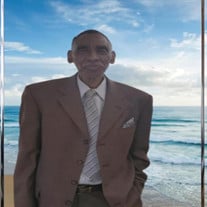 Obituary His soul has gone to God; The earth will soon claim its own, But Wade is shouting around the throne While we are left to mourn. But some day we will meet again; All of our loved ones have gone before; Some day we will reach that happy land Where parting will be no more! Wade White, Sr. was born December 26, 1952, in Los Angeles, CA, to Otis Bradley and Matilda Dorothy White. He arrived ten minutes after his twin sister, Wannetta, formalizing his title as the youngest of eleven children born to this union. Wade accepted Christ at a young age, while attending The Starlight Church of God in Christ under the leadership of his father, the late Supt. O. B. White. He participated in the youth choir and took pleasure in spending time with his church family and neighborhood friends. Wade attended Western Avenue Elementary, Horace Mann Jr. High, and Crenshaw High Schools. He was a very social and outspoken person, on and off campus. In his youth, Wade enjoyed playing baseball and swimming at Van Ness Park. As he grew older his brother, Tony, introduced him to and trained him in martial arts. Wade was a natural. It wasn’t long before he was training kids in the neighborhood. Wade’s social consciousness and commitment to the cause of having a positive impact on community building, led to his membership in the US Organization. Wade met and married Shirley Jones on July 28, 1973. They were the proud parents of Remitha Houston and Wade, Jr, whom they loved dearly. Tragically, Shirley passed away following an auto accident, leaving Wade to raise their two children, with the support of his mom and twin, Wannetta. Wade was blessed with two granddaughters, Jade & Jaylen and one great-grandson Jace whom he loved. Throughout the 70s and 90s, Wade worked in several industries in the Los Angeles, CA, and the San Antonio, TX, areas. Upon his return to California and The Starlight C.O.G.I.C where he served faithfully under his pastor, Cornelius Lockhart. Whatever was needed at the church, Wade always helped. He knew no strangers; and his door was always open. You could always get a meal. He particularly loved to barbeque. He enjoyed good company, good music and good conversation. Wade will always be remembered for his signature natural and stimulating conversation. His parents Supt. O. B. and Mother Matilda White and nine siblings preceded him in death: Louis, Otis Jr., Theodore, Betty, Doris, Anthony, Arthur, and twins, Harry and Larry. Wade White, Sr. leaves to cherish his memory, his children: Wade, Jr., Las Vegas; and Remitha, Rancho Cucamonga; two grand-daughters: Jade (Laquan Allen) and Jaylen White; great-grandson, Jace; one sister: Wannetta (Pastor Cornelius Lockhart); one brother-in-law: Bishop Joe L. Ealy; and a host of nieces, nephews, cousins, and friends

Obituary His soul has gone to God; The earth will soon claim its own, But Wade is shouting around the throne While we are left to mourn. But some day we will meet again; All of our loved ones have gone before; Some day we will reach that happy... View Obituary & Service Information

The family of Wade White Sr created this Life Tributes page to make it easy to share your memories.

Obituary
His soul has gone to God;
The earth will soon claim...

Send flowers to the White family.